The Federal State Budget-Funded Educational Institution of Higher Education “Rostov State University of Economics” (hereinafter referred to as “University”) carrying out educational activities based on the License for the right to conduct educational activities Ne 1804, dated December 08, 2015, issued by the Federal Service for Supervision in Education and Science, life-time, and based on the State Accreditation Certificate No 1846, dated April 12, 2016, issued by the Federal Service for Supervision in Education and Science, for the period from April 12, 2016 to December 22, 2020, in the person of the Vice-Rector for Studies Vasiliy Yu. Boev, acting under the power of attorney Ne 19/1169 dated April 3, 2019, publishes the proposal to conclude a Preliminary Contract for foreign citizens to study at RSUE; the Offer is addressed to any person with whom the contract (hereinafter the Contract) is signed on the terms and conditions set forth in the Preliminary Contract. The foreign citizen, with whom the Contract is signed, hereinafter is referred to as the “Listener”.

The proposal shall be considered an offer (a public offer) in accordance with Paragraph 2 of Article
437 of the Civil Code of the Russian Federation (hereinafter referred to as “the RF cc”).

The public offer (hereinafter referred to as “the Offer”) shall come into force upon being posted on
the official site of the University https://rsue.ru/ and shall be valid until the Offer revocation by the
University.

The University Impact Rankings rating was developed by Times Higher Education and is held in 2019 for the first time. The new rating evaluates all universities in the world according to criteria based on targets for the development of the world community until 2030 — UN Sustainable Development Goals.

The Strategy “Sustainable Development Goals (SDGs)”, adopted by the United Nations in 2015 in the program document “Transforming our world: an agenda for sustainable development for the period up to 2030”, is a logical development adopted by the world community for the period from 2000 to 2015 “ Millennium Development Goals ”and is aimed at creating conditions for the development of the economic and human potential of the countries of the world, combined with large-scale changes aimed at preserving the environment.

The University Impact Rankings rating developed on the basis of this strategy evaluates universities around the world in terms of their involvement in the achievement of the Sustainable Development Goals and the successes that universities have achieved in implementing this mission.

The RSEU (RINH) showed outstanding results according to the criteria of Education Quality (SDG 4), Decent Work and Economic Growth (SDG 8), Partnership for Sustainable Development (SDG 2), and by the criterion of Peace, Justice and Effective Institutions (SDG 16) second place in the world!

The educational intensiveness “Island 10-22” ended in Moscow, with 1,500 participants from all over Russia: students, teachers, rectors, entrepreneurs, and managers. The program was co-organized by the University of NTI “20.35”, the Ministry of Science and Higher Education of the Russian Federation, the Skolkovo Institute of Science and Technology, the Russian Venture Company (RVC), the Agency for Strategic Initiatives (ASI), and the organizers of the global conference on educational technologies in EdCrunch.

During the intensive course, university teams launched more than 300 inter-university projects in the field of data-based management, the creation of new personalized educational formats, the joint development of artificial intelligence technologies and others.

The mentors and mentors of the participants were representatives of government agencies, key specialists of the largest research and educational centers and leading companies. The program of 40 visionary lectures was delivered by the leading speakers of the Skolkovo Foundation and Skoltekh, and well-known experts from abroad spoke.

Rostov region was in the top 10 regions in terms of the number of selected representatives for educational intensiveness.

The RSEU (RINH) team, led by the rector Elena Makarenko, presented the university’s digital transformation project based on artificial intelligence technologies, big data with the support of more than 50 industrial partners and educational organizations. The markets Edunet, Aeronet, Avtonet were selected as priorities for technological development. The project was highly appreciated by the NTI expert community. As a result of the educational intensiveness “Island 10-22”, Rostov State Economic University (RINH) took the 2nd place and entered the top three universities among the 100 leading universities, confirming the reputation of one of the strongest universities in Russia.

RGEU (RINH) among 100 Russian universities signed a memorandum of cooperation in a network project on artificial intelligence with the University platform 20.35, the Agency for Strategic Initiatives (ASI) and IT companies, Russian leaders in AI and AI training: Mail.ru Group, Kribrum, Skyeng, Bigdatateam, GIL on the launch of a unified training program for artificial intelligence technologies. The network project, in which students, teachers, managers and scientists can participate, starts in September.

For the first time in Russia, an agreement was signed on the inclusion of online educational courses of Yandex LLC in the educational programs of higher education and further professional education of the Russian State University of Economics and Economics.

During the educational intensiveness “Island 10-22”, a tripartite cooperation agreement was signed between the NP “Promoting the development and use of navigation technologies”, the Association of developers, manufacturers and consumers of equipment and applications based on global satellite systems “GLONASS / GNSS Forum” and the Rostov State University of Economics (RINH).

According to the president of GLONASS NP Alexander Gurko, there are also great opportunities for interaction with the Rostov university in the direction of implementing the project of the National Technological Initiative for the Development of the Autonet Market, that is, the market for the development of services, systems and modern vehicles based on intelligent platforms, networks and infrastructure in the logistics of people and things.

Scientists of the Russian State University of Economics (RINH) are conducting a number of projects in the field of drones. For example, together with colleagues from the Voronezh State Forestry University, a technology is being developed for using unmanned aerial vehicles for high-precision aerosowing of elite seeds. On the basis of the university, in the framework of cooperation with the Discrete Innovation Small Aviation Cluster, the creation of the Center for Unmanned Transport is nearing completion.

In the framework of the “Island 10-22” intensive, the university also signed a cooperation agreement with the non-profit organization Analytical Center Aeronet. The Aeronet market covers unmanned aerial systems, aerospace systems and small spacecraft, remote sensing, monitoring and 3D-modeling of territories and objects, as well as related infrastructure.

On the site “Islands 10-22”, a number of important sessions were organized for the subjects of the Russian Federation devoted to issues of the digital economy. The Governor of the Rostov Region V.Yu. Golubev pays special attention to issues and initiatives of the national project “Digital Economy of the Russian Federation”. The high-quality fulfillment of all the tasks that are possible is possible only in a team work — and today in the region, together with all subjects of the economy, a whole pool of new opportunities is being formed.

The key event of the regional session on the possibilities of participating in the events of the federal project “Personnel for the Digital Economy” was the debriefing of the five regions in which the model for providing citizens with personal digital certificates will be tested.

On July 16, at the site “Islands 10-22”, the Ministry of Economic Development of Russia together with the Center for Competencies in Human Resources for the Digital Economy of the University 20.35 announced a list of five regions

According to the results of the secret ballot, the victory was won by the acting acting rector Elena Makarenko.

During the conference of workers and students of the RSEU (RINH) on the election of the rector on an alternative basis, which was attended by 292 delegates with voting rights, members of the credentials and counting commissions were elected, all necessary procedures were followed, and then the candidates’ election programs were heard.

Three candidates were nominated for the post of head of the university: Acting Rector Elena Makarenko, Director of the Institute of Magistracy Elena Ivanova, Dean of the Faculty of Management and Entrepreneurship Mikhail Surzhikov. Ivanova and Makarenko passed certification at the Ministry of Science and Higher Education of the Russian Federation and presented their university development programs.

According to the results of the secret ballot, the victory was won by the acting acting rector Elena Makarenko. The largest number of votes was cast for it — 238 out of 286 valid ballots.

Elena Nikolaevna presented a program aimed at «developing the university as a leading scientific and educational center, which has an innovative and social focus, effectively implements educational and scientific programs to ensure the progressive socio-economic development of the country with highly qualified personnel.»

Congratulations to Elena Nikolaevna and wish further successful work for the benefit of the university, region and country! Health, creativity, search for new ideas, prosperity and well-being.

In his lecture Professor gave an overall description of the problematic issues caused by corruption, its negative impact on social, economic and political environment, highlighted main “prerequisites” for corruption. The lecture was followed by questions and contributions both from Russian and Swedish students. Discussion included description of corruption in Russia, EU and Sweden, students’ personal experience and attitude to this phenomena, search of possible remedies for fight with corruption, etc.

This lecture was a part of an international education module for the students of both universities. Prior to lecture they had to get acknowledged with a relevant literature in the field of corruption prepared by teacher and to find at least 3 articles in this field by themselves. On basis of this preparatory work and the online lecture students later had to write an essay “Corruption in the EU and Russia” which is then was reviewed and comparatively analyzed by the students of partner-university.

Such form of cooperation in spite of being a new one for RSUE’s students was warmly greeted by them as far as it gives a unique opportunity not only to experience European educational practices but also to get to know mates from the other university, improve English proficiency and, of course, international profile.

June 25 was a day of a very bright event in the international life of our University. It is the first time in the 80-years history RSUE (RINH) when students received diplomas of other university. One year ago 9 students of different faculties of RSUE (RINH) joined the common double degree program of RSUE (RINH) and the European University (Switzerland, Spain). According the Double-diploma program students were studying international aspects of business and management at first in Rostov, and then in Barcelona. 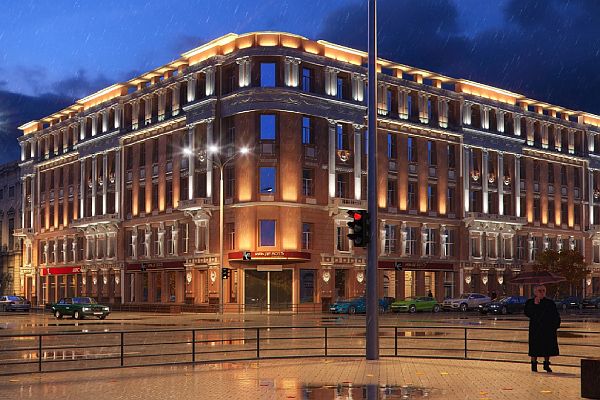